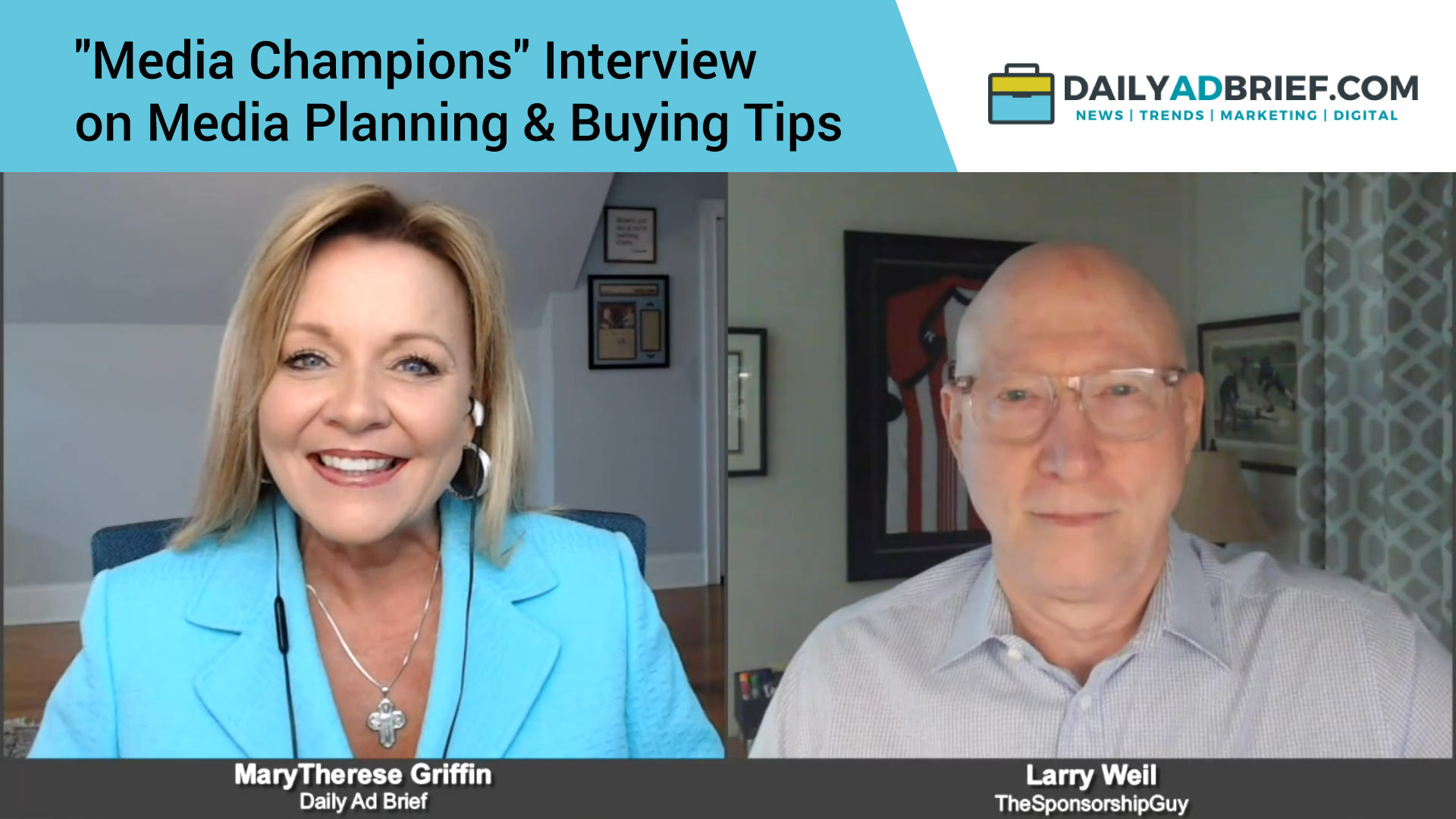 On this segment of “Media Champions” with Larry Weil from The Sponsorship Guy™, Daily Ad Brief host MaryTherese Griffin discusses the latest media planning and buying tips and tools used by advertising professionals to plan, buy, traffic, analyze and report on media. Stay ahead of the curve by listening to what these digital insiders have to say.

Larry Weil:
Well, it’s my pleasure to be here. It’s great to see you too.

MaryTherese Griffin:
Thank you very much that now it’s no secret, you do sponsorships. That’s what you do. You do everything from the Super Bowl to a big tech and arena events. Let’s talk about that as a source of advertising, because it’s huge. I mean, sponsorship strengths is a media channel. Lay it out for us, because it’s hot.

Larry Weil:
Yeah. I mean, most people are really familiar with sponsorship when it comes to sports events. Everything from the Super Bowl, to the Tractor bowl, to your local baseball team is going to have sponsors. Sponsorship has become a huge portion of the overall marketing and advertising spend it’s probably only eclipsed these days by digital overall. It is really a blend of a bunch of different channels, which is part of why it’s so big, but it has a lot of specific advantages to it.

MaryTherese Griffin:
Question: What is it that the sponsorships actually want? Because I can imagine there are organizations and companies out there that see this and they think, “How do I do that?” and “Would that benefit me?” What do they want as far as sponsorships?

Larry Weil:
Well, it’s just a little bit different than what they want generally out of advertising and marketing. They want to grow their business, right? So, what’s the strategy to grow your business?

And affinity, where they feel close to your brand is something that’s really well achieved through sponsorship with the sponsorship of a specific brand. It’s been shown in NASCAR many times – why is there a box of cornflakes on a car? Because, NASCAR fans that see that box of corn flakes will support them because they support their favorites or their favorite team. And, and so you sort of, I call it, “borrow the halo”.

And so, if you’re not really well known or you want to change your perception, you can line up a sponsorship with a group. It could be anything from quarter-horse-racing to nonprofit, sponsorships to college teams. It really just depends on your objective. They’re looking to grow their business and creative, take a little bit of a shortcut to creating a relationship with prospective customers

MaryTherese Griffin:
Question: Let’s talk about if it’s a first time event, if you will, and you don’t exactly have the background or the data to show, how do you get around that? How do you present that?

Larry Weil:
Such a great question – I get that a lot. I have hundreds of people reach out to me every month about their idea or their new concept or any event they’d like to do. Maybe they want to do a concert or event and they ask me how do I get sponsors?

And I have to kind of slow down a little bit and say, “Well, what do you have? Digital is so important. Do you have a social following? What have your audiences been in the past? What kind of earned media have you received?” So, it’s really almost like creating a media kit.

So, if they don’t have any of that and they go, “Well, we’re new. We don’t really have the followers, none of that.” You can’t show that to a sponsor.

What you can do though, is build a great plan.

If a sponsor can see that:

That goes a long way. They [sponsors] really respect people who know what they’re doing and have a strong plan. It’s the folks that come in and say, “Oh, we’ve got this great idea! Come give us some sponsorship money.” They don’t like that. They don’t like risk.

I hope you will come back because I would love to further this discussion with you. I’ve got like eight more questions. I want to ask you that when you come back on the show and let’s continue this soon!

We can connect you to The Sponsorship Guy. You’re going to want to pick his brain and we can help you do that. You can find Larry by finding us right here at daily average, I’m MaryTherese Griffin in Atlanta. We’ll see you next time for more Media Champions.

Larry Weil is a nationally recognized sponsorship expert and thought leader with over $200 million in deals to his credit. TheSponsorshipGuy.com is the leading sponsorship marketing agency for Virtual and Destination Events. Media outlets, large corporations, and entrepreneurs all seek out his insights and opinions, which have been published in print, digital and broadcast.

Want more? Subscribe to The Sponsorship Magnet© newsletter and get insights and updates every couple of weeks.